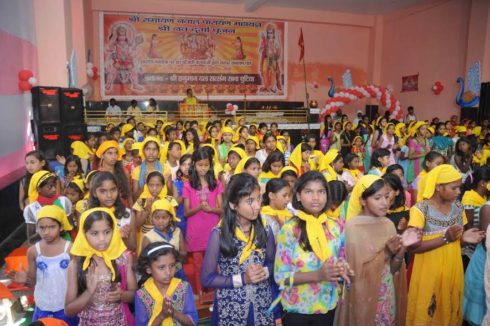 On the auspicious day of “Navratri” when the 9-day long festival dedicated to the Hindu goddess Durga — began,unmarried girls participated in Ramayan Path function associated with the Lord Ram at Prachin Ram Mandir,Upper Chutia in Ranchi.

While these girls prayed for peace and blessings of the God for happy conjugal life,the Hindu mythology has it that the Goddess Durga, a symbol of motherhood, power and courage, defeated the demon Mahishasura in a battle that lasted nine nights.

In any case,during Navratri,Hindus celebrate the triumph of good over evil with festivities that is conducted through ritualistic chanting, prayers and fasting. On each day of Navratri, one form of Goddess Durga is worshipped, and the rituals end on the tenth day with the immersion of the idols in water bodies.

Navratri, which literally means “nine nights,” is not always nine days in length. This year, for the first time since 2000, it will last for 10 days due to the first day of Navratri being spread over two days due to the lunar calendar.

As per the tradition,Navratri will end in 2016 on October 10 and will be followed by the Dussehra,festival celebrated across the country non the 10th day of the month known as Ashwin in the Hindu calendar.